Creature of the Deep 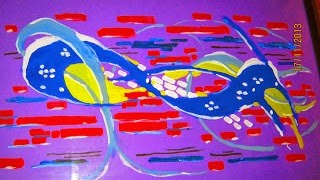 Hank's Acrylic Painting
Image:  An untitled abstract that Hank's loving
wife Shadah remarked to be like a sea creature

There has been sightings of a sea creature
of substantial size as big as that of a whale
but elongated and supple as a Queen Bee.
It can trace its beginnings apparently
to prehistoric times very much like that
of the platypus that uniquely grace
the landscape Down Under.

Elusive and slippery as an eel
it is not so much being coy to human
presence unlike that of household pets
but rather its habitat is found
further down at the sea-bed.

It has developed a system of survival
that allows it to move as freely as a busy bee
without any danger to itself.
Thanks to a tail-like structure that can twist
and turn like an octopus' tentacle.
This appendage is also multi-functional,
capable of pushing its weight forward
with motions of an oar or wriggles
to act as a rudder of a boat or better yet
to smack at any other smaller creatures
ambitious enough to be too close

Of voracious appetite it is rumored
to require the food equivalent to its weight daily.
For that reason it is a loner hunting alone
so that food resources need not be
shared among many mouths.

Similar to a whale it gives birth to its young.
It has an uncanny biological strategy
to ‘get into heat’ like a love struck canine
the moment it meets one of its kind.
When that happens they conveniently
adjust their sex like some kind of amoeba
so that one will be male and the other a female.
They will not allow a chance meeting
of a same sex pair to pass as they
might not get to meet that often.
To 'bump' into each other
is like winning at a lottery draw.
They are opportunists in that sense
but in a good sense

One can never imagine that there is a high
level of harmony like young lovers together.
Life goes on  in the deep down
below very peacefully.
It is a stark difference from conflicts
and killings, cheats and connivance
up on land at the surface of the oceans.

Note: This is Hank's 3rd effort (3rd Friday) to PPF
which calls for weekly submission of one's own painting.
Good strategy for there is a chance to at least ensure
52 paintings to be done in a year

Tony at d'Verse hosting at Meeting the Bar : Rhythm and Blank Verse,
and shared with PPF hosted by Kristin and EVA