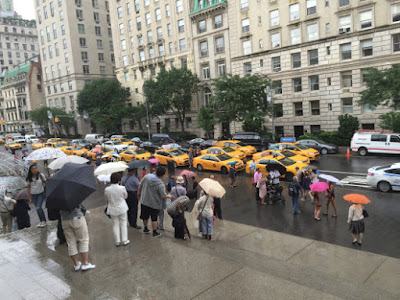 It was cats and dogs. She could hear the force of the winds lashing
against the windows.She had sought shelter in the office.staying back
even though it was time to go. She found herself now in a slight
drizzle standing on the pavement like everyone else. The cabs were
all there like maids in a row and they were not moving.

Apparently there were some disagreements with their management

On reflection, it had not been a good day. Testing times in the morning
on so many fronts. She had rushed in and barely seated herself safe in her
seat only to see her boss smirking sternly from inside the 'aquarium'. His
domain of glass-walled room fondly referred to by her peers.

'She is late again!' That must be swirling in his mind on seeing her. But
the bus did not meet their schedules. It was not her fault as she had been
waiting for a good hour.

Then the appointments! Three from good clients were abruptly cancelled
It did not matter whether they were supposed to come to the office or he
was to go to theirs. They were just cancelled.

Just as the lunch date with her fiance.What she dreaded happened.
'Why aren't responsible people be more responsible' she lamented!

Schedules not followed
Was it bad attitudes or
unlucky timing?

For Mary's at d'Verse : Haibun Monday 4 and
Marian's at the Tuesday Platform at Real Toads
Posted by kaykuala at 2:11 AM