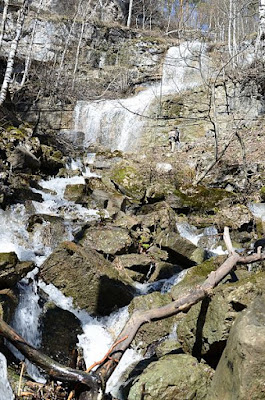 Secrets of Nature
Given consideration
Blessed be the faithful

Secrets of nature
Privilege for few who scaled
up the waterfall

Note: In modern times, in interests of disclosure, the secret of Mount Yudano
has been revealed. Due to the wearing away of the rock and the reddish minerals
in the thermal-warmed water, the waterfall looks exactly like that of a woman's.
The practice (of not revealing in ancient times) can be thought of as
worshipping the reproductive aspect of feminine earth  -  Chev

For Chev's CARPE DIEM #880
secrets unveiled of the Deep North:
coolness, cloud peaks, not permitted to tell
Posted by kaykuala at 4:26 PM