How was one to try to understand Picasso’s mind 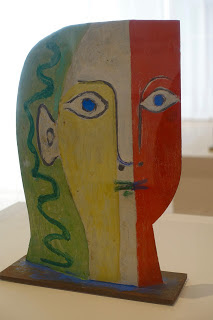 Photo attribution: ManicDDaily
Image: Picasso's sculpture an exhibit at
the  Art in

Artist: Picasso
Image: Guernica on the Spanish Civil
War -  known as one of the most moving
and powerful anti-war paintings in history.
(fair use of image)

Note:Cubism was invented around 1907
in Paris by Pablo Picasso and Georges Braque.
Cubism was the first abstract style of modern art.

For Outlawyer's Sunday's Mini
Challenge at Real Toads  -  Picasso
Posted by kaykuala at 2:32 AM