'Life is a Journey not a Destination' YH#15 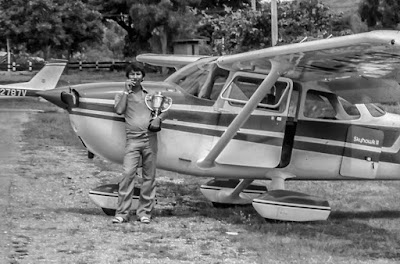 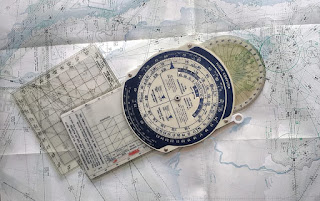 Attribution: Yusuf Hashim
Image: 2  No GPS then, just 'primitive topo maps and other implements' to grope along in the clouds

One often wonders. What push endurance to such a degree that time and space are just facts to be encountered and noted. This is Yusuf Hashim's journey! He is skillfully going towards his destination. He is not just an explorer who honed his skills just yesterday. No, not easy to go through his life's journeys (see YH#14 and the rest) if not fully equipped and fully prepared early in life. He pushed himself to be an achiever. That is why he is still at it feeling young at the ripe old age, oops! of 70!

The prose below was posted in Yusuf's FB on July 09, 2015 and Hank received permission yesterday to share this one aspect of Yusuf's talents not known to Hank before. This obviously laid bare his amazing self to be able to sustain his fantastic 'exploits' currently being shared in blogosphere!

The Prose
Another Blast from the Past
......
Yusuf Hashim says,
38 years ago .... 20-June-1977, on the grass apron of Runaway 22, Alor Setar Airstrip, when bell bottoms were in style, everything was gung-ho, and nothing was impossible. Today bell bottoms are out, everything is still gung-ho but the flesh is just a little unwilling. So I write more than I do physical things.

In the accompanying photo (above), this smirking young pilot is holding his Champion's Trophy -- won two days earlier in the International Air Navigation Competition, at the Hua Hin Air Rally in Thailand. Seemed like it was just yesterday. As you age, your past often flashes across your mind. It's like your computer asking you - "Do you want to send these files to the Recycle Bin or do you want to erase them forever? Of course I want to KEEP them forever. So I reminisce to keep them alive. Lest the ageing neurons delete them forever

I had flown the Cessna from Kuantan to Hua Hin, to compete in the Air Rally there. And now I'm flying it back with my trophy strapped down by the safety belt in the empty passenger seat. The Cessna 150 Skyhawk, call sign, 9M-AUR, is a two-seater, and it belonged to the Pahang Flying Club, where I was a founder member and its secretary at that time. I was also the first member to get my wings from the club. Malaysian PPL #1965. I wonder who is Private Pilot Licence Number #0007. For your info, those pilots who fly commercial jets hold ATPL or Air Transport Pilot Licences

And Alor Setar was just a refueling stop , like Phuket and Hat Yai. The detour to Phuket was made necessary because of a large tropical storm over Hat Yai which was unsafe for a light plane to fly into. Only another 2.5 hours more of solo flying over the main range, to reach home in Kuantan from Alor Setar.

Flying your own plane, all alone 2.5 kilometers up in the sky, has got to be among life's most unforgettable experiences.The plane is all trimmed out. Your hands are off the stick. You are dying for a cigarette, so you light up a cigarette. Nobody is there to say you couldn't, or you shouldn't. What could be more exhilarating than that? However, after a couple of puffs you decide its probably not wise. So you snuff the cigarette out into a large empty Milo tin you brought on board, because your poor rear end didn't quite agree with all that delicious unhygienic sea food you had in Hua Hin.
It was a LARGE Milo tin. I brought it on board just in case I needed it. Thank goodness I didn't. Otherwise it would have been quite an embarrassing tale, describing the yoga-type of gymnastics needed to poo into a Milo tin, 2.5 km up in the sky, while trying to still be in control of a tiny two seater plane. Some people I know, boastfully describe in detail, the gymnastics needed when they became members of the exclusive seven-mile-high club. I believe, if I had poo-ed into that Milo tin at 2.5 km up, I would have been the Charter Life President of the world's most exclusive Odd-Ball Club. But that was not to be.

However, the Milo tin was already open and I felt like peeing. So I peed into the Milo tin and I told myself I was simply making sure the cigarette was well snuffed out. I'm smiling now because it was a perfect Mr Bean moment.

Those days we had no GPS, and to find our way in the air, we used only Topo Maps, a compass, a combined protractor and parallel rule, and the flight "computer" as shown in the second photo. We also made use of features like Railway lines, prominent landmarks and DR or dead reckoning, to establish our positions. The map is on my lap as I fly VFR (Visual Flight Rules), looking out to the ground occasionally, trying to identify prominent ground features, just to ensure I am on the right track. It's nerve wrecking and you are on an adrenalin high most of the time.

Those were good days indeed. Aviation Gasoline or Avgas was only 60 sen per gallon, and was tax exempted for Flying Clubs. And single engine airplanes were relatively cheap too. We bought this Cessna 150 on Hire Purchase for only RM95,000. For comparison, my new Volvo 144 at that time was RM27,000. Now it costs nearly a thousand ringgit an hour to fly. And to maintain your licence you have to fly a certain minimum number of hours a year. I can no longer afford to fly for fun, so I simply let my PPL licence lapse........

I want to conclude by telling you I've also stopped smoking. I am actually a smoker. I stop occasionally only because I wanted to set a good example for my kids and grandkids, to show them that cold turkey is the best and most effective way to stop smoking. But I ain't succeeding because my eldest ones are still smoking .......oh how I love the good old days when I used to take one or two of my daddy's cigarettes while he was having his afternoon nap.....
Posted by kaykuala at 1:34 AM