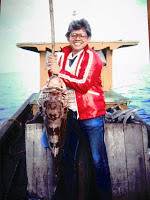 Image:  The Morning After, Hank with
a Whopper, a long time ago! It brought
back the memories
It was late afternoon. The heat of the day still beating down on us. The sea
was calm. The sky was clear in bluish hues with white clouds drifting leisurely by.
It looked to be so inviting. The beach was filled with the shrieks and laughter
of the youngsters, stragglers from the crowd barely minutes ago. It would
be quiet shortly with dusk approaching.

We put out to sea in the middle of the night. The heavens above were full of twinkling
stars. A slight sea breeze playfully rocked the boat a little. We shone the torch-lights
into the crystal clear waters. That was one way to attract the squids to the surface
which were scooped up as bait.
Light waves kept lapping the sides of the boat to a regular rhythm. It rocked
us in time preventing us from having a shut-eye. The night was uneventful with
just small bites. The regular rocking was a bother. It was frustrating and the night
was long. The break of dawn was the clincher.Bites galore, what a whopper!
Night fishing was a test of patience
in still of the night
rocking lullaby movements
not meant to doze off