an attraction through the years 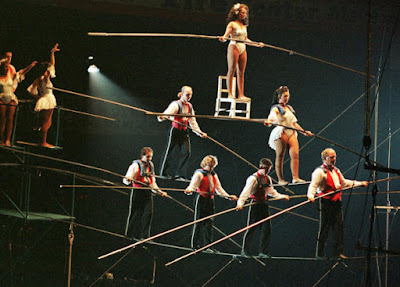 Attribution: Andrew Cutraro/AFP/Getty Images
Image: The Flying Wallendas performing the seven-person
Great Pyramid in 1998, at the Shrine Circus. Two members
of the family were killed in the same arena while trying to
perform the same act 36-years-ago (fair use)

wild animals tamed for their acts at will
never thought ringmasters were so brazen
cracking and snapping a whip for a shield
mauled or stomped on, on occasions were known

the Ringling Barnum Bailey and Wallendas
entertained for generations of clamouring outbursts
despite change of ownerships tragedies, and a Big Tent fire
final curtains last May having sustained for 146 years