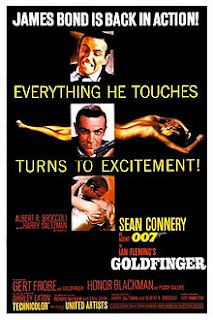 Image:1 Goldfinger was the first Bond film to win an Academy Award . A  financial success, recouping its budget in just two weeks and is hailed and still being acclaimed as one of the best films in the entire Bond series. 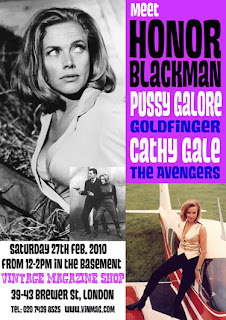 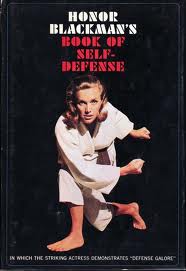 Image4: With Patrick McNee in The Avengers' TV series 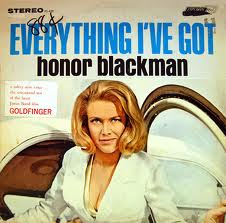 Image:5 A song she recorded with Patrick McNee in 1964, "Kinky Boots", was a surprise hit, peaking at No.5 in 1990 After her appearance in Goldfinger, she recorded a full album of songs, "Everything I've Got".
{Picture Credits: From Google Images)

Notes:
Goldfinger was the third film in the James Bond series and also the third to star Sean Connery as James Bond.

Honor Blackman was older than Sean  and at 38 she was the oldest actress ever to play a Bond girl.

Honor Blackman as Pussy Galore:  Blackman was selected for the role of Pussy Galore because of her role in The Avengers and the script was rewritten to show Blackman's judo abilities Concerned about censors, the producers thought about changing the name to "Kitty Galore", but they decided "if you were a ten-year old boy and knew what the name meant, you weren't a ten-year old boy, you were a dirty little bitch. Blackman took delight in embarrassing interviewers by repeatedly mentioning the character's name. Whilst the American censors did not interfere with the name in the film, they refused to allow the name "Pussy Galore" to appear on promotional materials and for the US market she was subsequently referred to by the title 'Miss Galore'

(all of above info from Wiki)

(I am taking the stance of reflecting on the sensational Honor Blackman ever aware of the stream of consciousness of the person  and not on a philosophical slant of the prompt, Honor)

Judo exponent
To show her Judo prowess
Script was adjusted

Her reputation
As Gale in The Avengers
earlier,sealed the deal

On completion she
recorded a full album
"Everything I've Got".