Had made it big on the Charts
On everyone’s lips 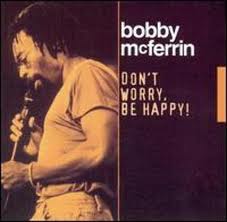 Bobby McFerrin
Don't Worry, Be Happy who
could forget that gem!

"Don't Worry, Be Happy"  released in 1988 was number one for 2 weeks on the Billboard Hot 100 chart. At the 1989 Grammy it won  the Song of the Year, Record of the Year, and Best Male Pop Vocal Performance  (Wiki)
(Picture Credit: Google images)

Haiku Heights Day 17 #129 – with prompt wonder  and  OpenLinkMonday at Real Toads
Posted by kaykuala at 10:39 AM