Pleiades are of the mysterious 'seven' in the heavens 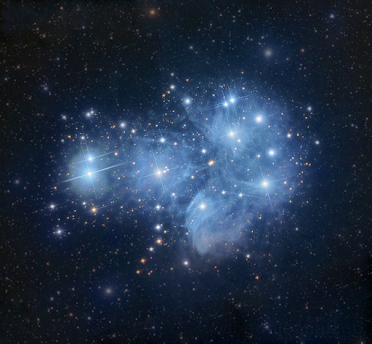 Author:Pablo Carlos Budassi
Image: The Pleiades star cluster as photographed
by Pablo Carlos Budassi an amateur astronomer (here)
Pleiades are of the mysterious 'seven' in the heavens
Lie in a cluster but claimed by many in contention
Exopolitics believe they are off-world distant cousins to humans
Iroquois petition the constellation for happiness and salvation
Assist humanity in spiritual transformation echoed the Pleiadians
Distinctive Nordic, appearance still in progress in evolutionary terms
Earth's closest cluster used cosmic distance ladder to plot distances
Subaru took it upon themselves as their logo in  all permanence
Note: The Pleiades or the 'Seven Sisters' is a conspicuous cluster of stars in
the constellation Taurus. In Greek mythology, these are the seven daughters
of Titan Atlas and Oceanid Pleione who were turned into a group of stars.
Hank chose the  ACROSTIC poem of PLEIADES
with each letter starting the first word of subsequent lines
Laura's at d'Verse's Poetics - stars that count
Posted by kaykuala at 8:09 PM