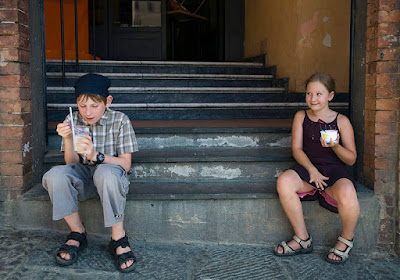 The Prose
I was in a hurry. I was late for an appointment. It was not my
nature to be late for anything. "It is better to be early by 30
minutes than late by 3 minutes" that I had often been told.
Brisk walking along the block not hurrying, not wanting to be
sweaty upon arrival, I should be there in 15 minutes so I reasoned

I took a turn around the block and, lo and behold, there she was
facing me. We were pleasantly surprised, taken aback in fact.

We stood still quietly looking at each other. Only the pavement
had the clatter of movements of people. Not a word from either
of us for that brief few seconds.

Then simultaneously we both lurched forward involuntarily and
hugged each other tightly just as it had been decades ago. The
utter shock of a chance meeting again was overwhelming. To
think it was a street corner but it did not matter. Tears flowed
freely. I had not remembered crying lately but it just happened

How long had it been, 30 years? And she was just as sweet
and beautiful as before.